The 3 Important Factors of Buying an Air Conditioner 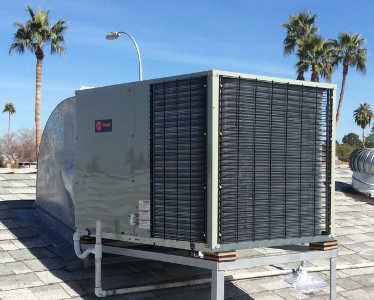 (Pictured above is one of our packaged heat pump installations)

SEER: Seasonal Energy Efficiency Ratio measures heat pump and air conditioning cooling efficiency. It’s a ratio of how much electricity the system uses to reject BTU’s from your home over a range of temperatures in a season. The higher the SEER rating the more efficient the system will be at cooling your home in the summer time.

HSPF: Heating Seasonal Performance Factor is used to measure the heating efficiency of heat pumps. The higher the number the more efficient it is, it’s a ratio of BTU’s to electrical usage in a given heating season. It’s how efficient your unit is in the winter time.

AFUE: Annual Fuel Utilitzation Efficiency is a measure of how much fuel a gas furnace can convert into heat energy. Like the other ratings the higher the rating the more efficient.

Basically the more efficient your system is, the better it is at taking the energy it draws and then cooling or heating your home. These units give you the most long term value for your investment. In the long run you will make your money back on the unit with reduced utility cost. The most efficient systems have variable speed technology and can communicate with the thermostat, motor speeds, and the compressor speed and they can be zoned. Those systems use the least amount of energy necessary to satisfy your thermostats temperature.

More efficient systems use ECM and variable speed motors. The ECM motors have constant torque technology that allows the fan to blow at a constant speed and allows for better airflow, they can have 2 or 3 different speeds. In a variable speed system the torque will vary depending on what is needed from the thermostat and how the rest of the system is performing. Imagine its speed being able to operate on scale anywhere between 0 to 100%.

Systems that aren’t as efficient require more energy to satisfy your thermostat because they waste more energy that is wasted and not converted into cooling or heating. The motors and compressors for these systems will just turn on and off and only operate at one speed. They aren’t as good as the more efficient systems but if there is ever a breakdown not covered under warranty the parts are cheaper and makes maintenance easier in the long run. If your unit is over 10 years old chances are it isn’t that efficient anyway so if you upgrade to the government required minimum of 14 SEER you will still save money on utilities in the summer time, however you might not make money back on your investment.

The less efficient motor used in lower SEER systems operates without constant torque. These fans are less reliable and are simple for manufacturers to make, which is why they are used in cheaper systems. They don’t distribute air efficiently and will eventually wear down because they only work in one speed that is inconsistent due to the design of it.

The cheaper systems also use cheaper compressors. They only operate at one speed. When your thermostats calls for cooling or heating then the compressor will kick on till satisfied then turn off. They aren’t as efficient because they turn on at full strength no matter what time of year it is. This can make a huge difference in electrical cost because of how hot it gets in Arizona, so even when its 80 to 90 degrees outside it will still operate like its 115 outside!

The final yet most important aspects of the install job is to make sure that your unit is sized properly, a quality install job is done, and you get a reliable unit. A lot of contractors don’t worry about any of these things they want to just sell a unit and get the job over with. We take the time to do all of these things so you have a unit that functions properly and as efficient as possible.

It’s important when getting a new air conditioner that you know what size of unit is going to work properly for your home. The amount of heat your home needs to be removed is measured in BTU (british thermal units) and every 12,000 BTU’s is one ton. The units are sized by tonnage for example a 5 ton unit can remove 60,000 BTU’s. In order to know how many BTU’s you need removed, your home needs to have a heat load calculation done. A lot of the time when we perform one of these calculations we often find that the units we’re replacing were oversized. When we find that someone’s unit is oversized we can save them money in installation cost because the smaller units are cheaper. Not only can you save money but your unit will operate properly it won’t short cycle, cause high humidity, or frequently breakdown. Sometimes if there is a home with two units we can even convert them to just having one unit on the home and zoning them.

When your having your air conditioner installed the most important thing besides efficiency is if the contractor is going to deliver a quality install. It’s important because if your unit is installed improperly then you’re going to be dealing with A/C problems. Poor installer training and low bid contractors are why there are poor installs for air conditioners. That’s why we offer free estimates so we can have a technician come out, check everything so you get the best install possible. We always measure for our install jobs and go the extra mile to make sure everyone gets a good install. For example, a lot of people make plenums out of duct board a flimsy non-reliable material while we always fabricate sheet metal. We also replace the disconnect box, make sure your drain line is clear and add necessary connections, change the filter frame, add vibration isolation pads (if noise is an issue), seal new duct connections, provide crane service if necessary, check and change low voltage connections, seal all roof penetrations, remove old equipment, and we have a 100% satisfaction guarantee!

The more reliable and durable a unit is the longer it’s going to work. That’s why we recommend Trane because they build a superior AC unit. They have developed technology to build some of the most dependable and reliable air conditioners available. Trane units are tested in the most extreme conditions at their Systems Extreme Environmental Test lab in Tyler, Texas. That’s how Trane has developed the Climatuff Compressor, Spine Fin Coil, and Hyperion Air Handler. You can read more about the reliability of Trane here.

If you don’t have adequate air distribution before the install then the ductwork must be addressed as part of the install. The ductwork is important so that air is delivered to you and so that the thermostat is satisfied. There are two solutions if the ductwork is reducing efficiency. Either the ducts need to be replaced and resized or they need to be sealed.

When replacing your system you want to replace your duct work if it is undersized or oversized. Undersized will result in sharp kinks and bends that wont allow for adequate airflow. Oversized ductwork will result in way too much travel for the air and will cause your system to work harder to satisfy you and your thermostat. Too many tares in the duct could also be a reason for replacing.

If the technician sees that your ductwork is a good size but finds that there are leaks, then your going to need a ductseal performed. Ductsealing is typically cheaper and less labor intensive than replacing the ductwork and is a good option as long as the ductwork is properly sized. Our company uses Aeroseal when there are leaks in ductwork. It uses micro-polymer technology to seal the ducts from the inside. A computer controls the process, first the ducts are pressurized so that air blows through the leaks and so that they are found by the computer, then the system sprays in micro-polymers so that your ducts are sealed from the inside.